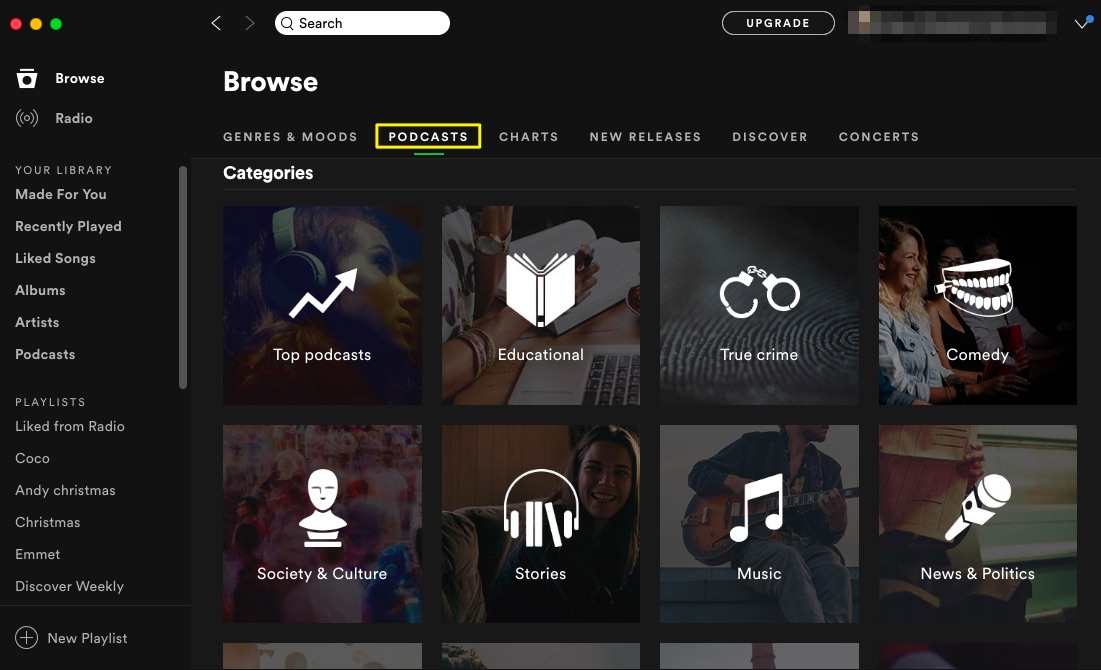 The podcasting world is really exploding in the past few years. In fact, the top podcast publisher saw over 150 million total downloads in December 2019 alone. While this kind of statistic is straightforward, however, measuring what makes a show successful or popular can be subjective and hard to reproduce.

That’s where some heavy research and lots of time spent listening to podcasts can come in handy. Fortunately, here at SecondLineThemes, we love podcasts. So we’ve explored what’s out there and making waves, so you can learn from some of the best in the business.

In this article, we’ll highlight ten of the longest-running and most popular podcasts. Along the way, we’ll introduce some best practices you can start implementing with your own podcast right away. Let’s get started!

Podcast Rankings and How We Chose the ‘Best’

Ranking podcasts can be tough for a number of reasons. Not only are there many styles and genres, but not everyone uses the same podcast platforms. This can make it difficult to track rankings and popularity.

However, there are several places to get reliable podcast data. Podtrac provides a solid baseline for publishing data across the industry. Plus, iTunes’ podcast charts and Chartable provide real-time rankings in various categories based on downloads from several publishers.

Our list highlights podcasts that are both long-running and consistently popular, based on a combination of data from multiple sources. Keep in mind that you won’t see popular daily news podcasts featured, because we’ve focused on shows that are episodic and serialized.

To build our list, we combined data from iTunes Charts, a variety of year-end round-ups (such as The Atlantic’s top 50 list), and data from Chartable. We also looked at some historical data, as well as charts from Top Podcast. The result is ten podcasts we’d recommend checking out.

Consistency is key for most podcast listeners. Crime Junkies has over 100,000 reviews on Apple Podcasts. The level of detail and research that goes into each episode pays off, based on this podcast’s success.

Reviews often highlight True Crime Garage as a ‘male-focused alternative’ to some of the other popular crime podcasts hosted by women. It’s a few guys sitting in a garage, drinking some beers and talking about old crime cases.

Not only are the hosts appealing to listeners who love crime stories, but there are also lots of laughs. This is another in a long line of crime podcasts that successfully portray dark topics in an entertaining way.

This show features one host who is also a stand-up comedian. This means you can count on a laugh to go with some compelling true crime stories.

Podcast listeners really love true crime. My Favorite Murder is no exception. The twist with this show is the comedic value and energy the hosts bring to the genre.

Uhh Yeah Dude is touted as one of the first comedy podcasts. As such, it helped to create the genre, and received early acclaim from places like Rolling Stone.

This show’s longevity and appeal are often attributed to the hosts’ friendly accessibility and connection to the audience.

ID1oT is a great example of a niche podcast that focused on ‘nerd culture’ and gained a solid following because of it. The host has a lot of name recognition, and is able to draw in lots of interesting guests.

An engaging website has helped this show stay connected with listeners. This was especially true throughout a major rebranding of the podcast.

6. Stuff You Should Know

Stuff You Should Know (SYSK) came about through the work of two former senior editors at How Stuff Works. These hosts deliver an interesting discussion with exceptional production quality, without coming across as know-it-alls.

Many reviews of SYSK note the level of research that goes into each show as a key reason to listen.

Much of The Joe Rogan Experience show’s success can be attributed to the fact that Rogan was a known celebrity prior to making the show.

The prolific nature of this show’s production schedule guarantees that listeners don’t have to wait long to get another dose. Rogan is also known to record shows that are more than three hours long, which means that listeners never lack for content.

8. The Tech Guy/This Week in Tech 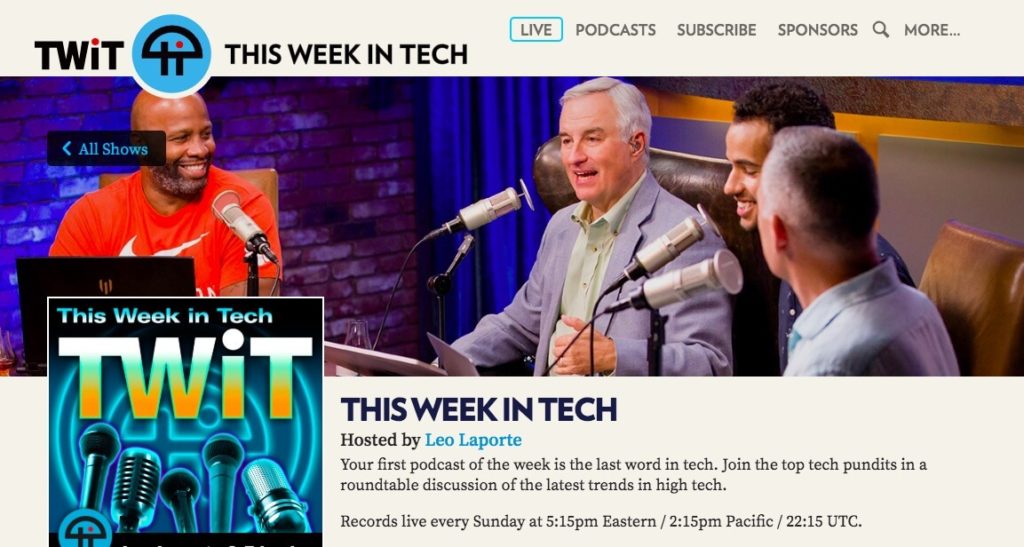 The Tech Guy is often noted as the longest-running podcast. In fact, Leo Laporte now hosts several shows, including This Week in Tech (which won the first-ever People’s Choice award for podcasts).

Engaging with its audience via phoned-in questions is a key to success for this three-hour show. Panel discussions with experts and personalities in the technology world also draw a faithful audience.

9. Too Beautiful to Live 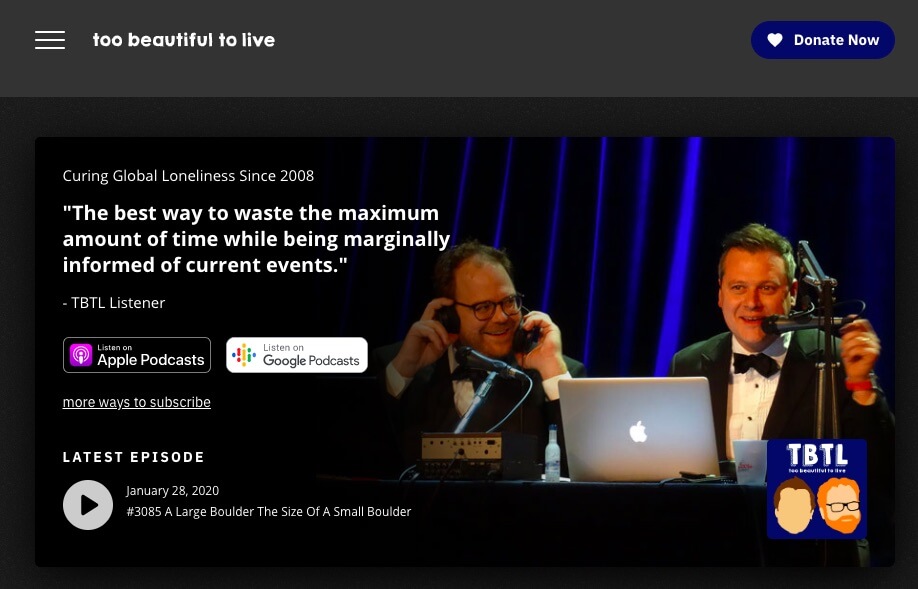 This is a good example of a show that’s really just two friends talking and being silly. Too Beautiful to Live has a humble appeal that feels like you’re just hanging out with friends.

Reviewers say they feel at home with the hosts, and that it’s easy to jump in and listen at any time. 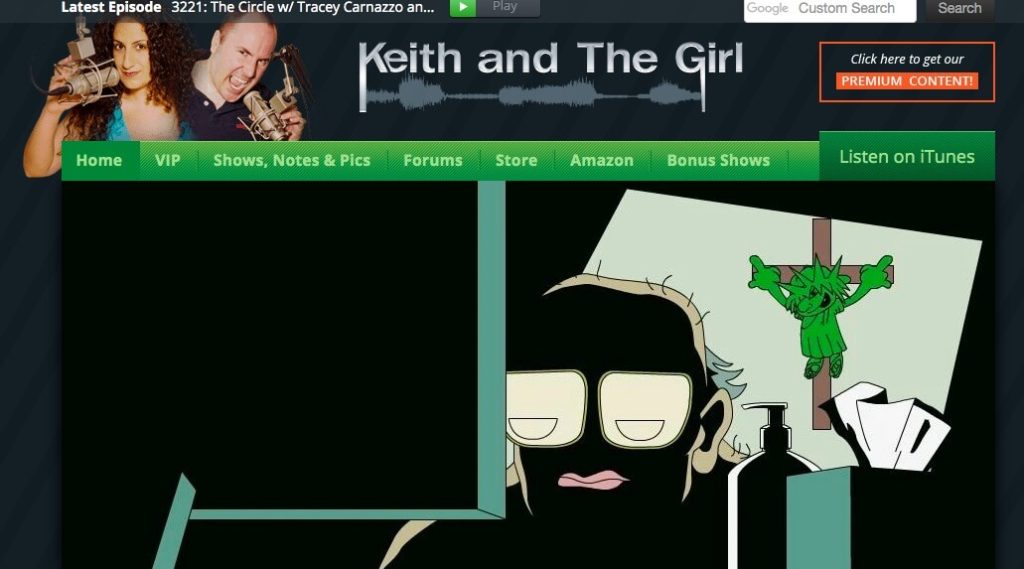 Producing a daily podcast can be grueling, but it’s paid off for Keith and The Girl. Recognized as a pioneer and still going strong, this is favorite show for many.

Audience interaction has been a big driver for this show. That’s a key factor in its high download numbers and listener counts.

Bonus: The Longest-Running Podcast and How You Can Duplicate Its Success

Arguably the longest-running podcast, This American Life (TAL), debuted in November of 1995:

While this show started before the advent of modern podcast technology, you can access and download episodes from 1995 onward. There are 640 episodes attributed to the show over that time period. While it’s not the most prolific podcast on this list, it definitely carries many accolades.

You can count on TAL being in the top ten of just about any podcast chart available. Its main focus is on journalistic non-fiction. What many have tried to mimic is the show’s ability to tell a compelling story, and apply journalistic practices to create an engaging plot.

Additionally, TAL has a reputation for being willing to experiment with style. The show is also known for inviting listeners in through its website to help create the memorable stories it’s known for.

While murder and comedy tend to dominate the podcast charts, there are some best podcast practices that can be applied to any genre. If you’re working on improving your podcast or starting a new one, the podcasts listed above demonstrate plenty of strategies that can help you set a new bar for your show.

Understanding your audience is one part of the puzzle. However, if your show is not produced well, that can be a problem for listeners who are looking for a compelling auditory experience. On the other hand, if you’re worried about a lack of interesting guests – don’t be. Many of the shows on our list never feature them.

Some of the best shows also keep their listeners engaged through a dedicated podcast website. We see that in most of the successful podcasts, and so it’s recommended to all podcasts to have a dedicated website with a custom domain. Podcasters often choose from multiple platforms like WordPress, Squarespace, Wix or Podcastpage.io. Here at SecondLineThemes, we make it easy to create an outstanding online experience for your followers with our professional podcast themes for WordPress!